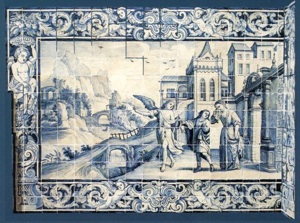 There are very few places in the world that can pride themselves of maintaining the tradition and artistic use of tiles. Each group of “azulejos” (from the Arab word azzelij meaning small polished stone), as they are called in Portuguese, tell a story or portray a tradition. The best way to get to know this beautiful and unique traditional form of Portuguese art is to walk around the city, or visit the museum.

These tiles have always been used in a very original form in Portugal. Even though they have a common use in other countries such as Italy, Spain, Turkey or Morocco, in no country have they become such a relevant form of artistic expression, as they have done in Portugal. They are used to decorate interiors or whole facades of houses or churches. They have had a poetic intervention in the architectural form of Lisbon (and other Portuguese cities). These tiles underwent various influences, from the Islamic tradition, to the influences from the Dutch market that had a wide demand for these tiles, having changed the way they were painted, the symbolism or characteristics.

This museum has two alluring characteristics, one is the outstanding collection of azulejos it holds inside and another is the stunning building. This old Madre de Deus Convent, founded in 1509 by Rainha D. Leonor, holds an exquisite Church inside, with the walls filled with tiles and painted with gold. The collection shows tiles made since the XVth Century, during the archaic period, until the XXIst century, showing how this form of art has adapted to modern times. Apart from the building and the ancient pieces in a permanent exhibition, you may also visit the work of contemporary factories or individual artists that are shown during the temporary exhibitions.

Azulejos are present in so many corners of the city, at viewpoints, metro stations, church fronts, or on walls of important buildings. Take a tour of the city and enjoy a study of them.

In Alfama, the “azulejos” show the images of saints. They are placed at the entrance of houses as a form of protection. On the big panels of the São Vicente de Fora Monastery, the “azulejos” describe the conquer of Lisbon, with the christians climbing the city walls built by the Muslims. Some war arms can be seen, as well as dead bodies, describing what was lived during this battle.

Throughout the Bairro Alto or the Chiado areas, some of the facades of houses are filled with this Portuguese form of art. Each group of them tells a story. Take some time to study the symbols, the body languages and the materials represented. Stop at the São Roque Church or at the Ferreira das Tabuletas house.

But the crown point of the tiles tour is in the beautiful town of Sintra. This breathtaking place is home to some of the most important and impressive Portuguese palaces. Inside the Vila Palace or in the National Palace you may see one of the most genuine application of the art of tiles, a very popular form of art of the Portuguese monarchy for many centuries. 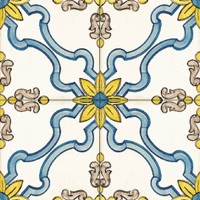 Here is a list of a few shops you may want to visit to purchase or just study some azulejos:

This shop opened in 1940 and has since then sold crafts from different parts of the country, including small tile panels.

Since its inauguration in the 1960‘s, it’s a well-known typical shop in Lisbon where you can find all sorts of national arts and crafts. The second shop, however, opened more recently, in 2007.

The factory has existed since 1741, but the shop only opened much later in 1916. It is the oldest tile factory in Portugal and it still reproduces models from the XVIIth and XVIIIth centuries.

In the late 80’s, this shop opened to sell exclusively hand painted tiles, 99% of which are made in the actual shop.

This shop belongs to a factory in Azeitão that exists since the 60’s/70’s. It sells ceramics, but mainly azulejos, copying XVIIth and XVIIIth century models but also restoring some old ones.

It is possible to visit this imponent factory that makes big tile panels for many important places in Portugal and in Europe. It was the Viuva Lamego that designed and produced the tiles that cover the walls of the metro underground. Some of their tiles may be purchased if you visit their installations in Sintra, which has proved to be a very interesting experience.

For great hotels in Lisbon, check out our recommended hotels, perfectly located for you to visit all of Lisbon's main attractions and at the best prices: www.lisboa-live.com